FERC chairman explains why utilities must adapt or die 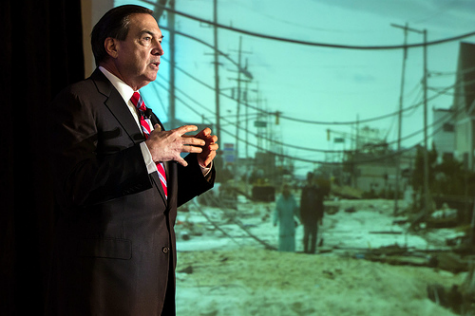 Moments before finishing his keynote address at the National Summit on Integrating Energy Efficiency & Smart Grid on Tuesday in Washington, D.C., Federal Energy Regulatory Commission (FERC) chairman Jon Wellinghoff told the audience that “ultimately, utilities are going to have to adapt or die.”

It was an abrupt and somewhat dark end to what started as a talk on energy efficiency. “One of my favorite topics is the integration of energy efficiency and smart grid,” Wellinghoff noted rather jovially at the start.

WHY WE NEED ENERGY EFFICIENCY

To start his speech, Wellinghoff showed the audience an image of an urban landscape devastated by Hurricane Sandy. Then, he switched to an image of the now infamous Super Bowl blackout.

Consumers today want more control of their energy consumption, he told the gathered audience of electric utility executives, regulators, energy efficiency and others. Wellinghoff was referring not just to control in the form of efficient energy use, but quite literally control in basic terms of consumers getting electricity when they want it and how they want. Rooftop solar, he noted, is a form of control.

“We have to think about how we can take advantage of the fact that people are much more interested in how these things work, how to control them and how to use them more effectively,” Wellinghoff said. "People understand the immediate consequence to not having the lights on.”

“We need intelligent efficiency integrated into the system,” Wellinghoff said, because it will simply reduce costs both on the grid and for the consumer.

WHY UTILITIES MUST ADAPT OR DIE

The most effective way to impact customer usage is through price signals.

“It’s a trend, a slow trend, but hopefully one that will accelerate in the next decade,” Wellinghoff said. Utilities need to send price signals to consumers so they can respond to the the costs on the grid because the costs aren’t the same all the time.

“At the end of the month, consumers get a bill that basically says your cost is 10 cents or 12 cents or 15 cents a kilowatt-hour,” Wellinghoff noted. “But consumers have no concept of how the cost of electricity varies—it varies minute-by-minute, virtually by the cost of the resources that come into the system based on demand and other factors.”

“We cannot continue to have average prices when we have unaverage usage patterns,” Wellinghoff said. "Consumers are going to want control" and intelligent efficiency will give them that. But “the only way that dynamic pricing will work is with market competition,” suggesting that “ultimately, we need to go to competitive retail system."

Wellinghoff stated that "utilities need to work with [intelligent efficiency] companies" because "ultimately, if we don't do that, we're going to have to have massive changes in our system."

Wellinghoff paused for just a moment, seeming to savor his last words. “Ultimately, utilities are going to have to adapt or die."

Enjoyed what you read? You may also want to read Utility Dive's look at why smart grid and energy efficiency aren't (but should be) on the same team.