Smart meters are here. So why isn't dynamic pricing?

In the last few years, utilities across the U.S. have installed millions of smart meters, a move that was expected to usher in new pricing options. But utilities have been slow to adopt dynamic pricing programs. Time of use (TOU) rates are available to only 1% of residential customers, according to the Brattle Group, and only 1% of those ratepayers use them.

So why isn't dynamic pricing more accessible? A recent pilot program may shed some light.

A three-year pilot program offering Xcel Energy customers dynamic pricing options lowered load and energy use, but was not cost-effective.

The results of the pilot program in Boulder, Colorado, generally matched up with findings from other dynamic pricing programs, according to the report filed with the Colorado Public Utilities Commission by EnerNOC. However, dynamic pricing was less effective in the pilot compared with other pricing programs, partly because Boulder has less air conditioning (AC) than the areas where the other pilots occurred.

Xcel spent about $1 million on the pilot program, which offered about 4,000 customers in Boulder three pricing options: critical peak pricing (CPP), peak time rebate (PTR) and TOU rates. However, the project only produced about $75,000 in benefits, the report said.

“The pilot results showed that the advanced rates tested are not cost effective as deployed, but the pilot does provide guidance as to how the cost effectiveness might be improved should programs be deployed in the future,” the report said.

Besides traditional TOU rates that have higher prices during peak load periods, Xcel offered CPP rates that were based on TOU prices but included a much higher rate (51 cents/kWh) that Xcel could charge during unusual times when the grid system was stressed. The PTR rate was based on standard residential rates but offered a rebate if customers cut their electric use during critical peak periods. 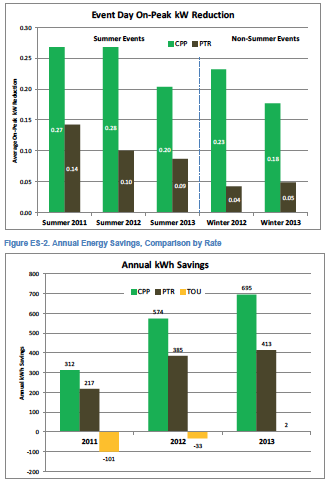 TOU participants reduced their on-peak use, but increased their off-peak usage, a typical result for TOU rates, the report said.

In contrast, CPP and PTR participants saved energy during all periods. “This result is consistent with other findings in the industry for event-driven rates, as these rates usually lead to an increased awareness of overall energy use,” the report said. “When customers are more aware of their energy use, they use less energy.”

Dynamic pricing had little effect in the fall, winter and spring because there is less discretionary energy use during those seasons, according to the report.

What's next for dynamic pricing?

The dynamic pricing pilot was less effective than Xcel's Saver's Switch program, a voluntary program that gives customers a $40 rebate if they let the utility ratchet up their AC temperature settings during critical peak load periods. The Saver's Switch program lowers customer's average load by 3 kW per event compared with 1.07 kW under the dynamic pricing pilot program.

In an unusual result, the pilot program became less effective over time. “This drop in savings has not generally been seen in other studies in the industry, and may be due to a decrease in level of participant engagement,” the report said.

Although not many pilot participants had in-home smart devices (IHSD), EnerNOC was able to draw some generalizations from the results. “For those with IHSDs, there were higher savings during summer events, presumably driven by the control of the thermostat setpoint by the devices,” the report said. “During non-summer events, those with IHSDs increased their usage in some cases.”

EnerNOC recommended that Xcel target customers with air conditioning. The energy efficiency company also urged Xcel to provide more information to customers on dynamic pricing rates. “The feedback must be credible and specific to the customers in order for it to be effective,” EnerNOC said.

View all | Post a press release
EVLO Selects Nuvation Energy Battery Management Systems for their Energy Storage Solutions
From Nuvation Energy
Cascade Energy Announces New CEO and Creates Employee Stock Ownership Plan
From Cascade Energy
Open International has been recognized as a Representative Vendor in 2021 Gartner® Market Gu...
From Open International
BluWave-ai and City of Summerside Deliver First AI-Optimized Utility Smart Grid in North Ame...
From BluWave-ai
Editors' picks
Latest in Load Management, Efficiency & Demand Response
© 2021 Industry Dive. All rights reserved. | View our other publications | Privacy policy | Terms of use | Take down policy.
We use cookies to optimize your experience on our website and for analytics and advertising purposes. By continuing to use our site, you agree to our cookie policy. Learn more
Accept