The challenges may vary by region, market and utility model, but four major issues loom large for electric utilities in 2014: a changing resource mix, the rise of distributed generation, the shift toward energy efficiency and weak -- in some cases, negative -- demand growth.

Demand growth has been falling steadily for years on improved efficiency and, more recently, increased distributed generation. The Energy Information Administration expects demand to increase nationally by only 0.9% a year on average through 2040. 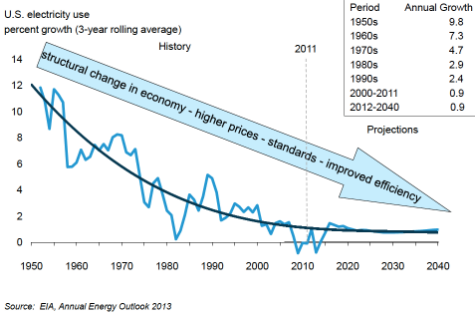 Electricity consumption plunged when the economy tipped into a recession in 2008. While the economy has largely recovered, demand growth remained anemic in most parts of the U.S.

Low demand growth is a problem for utilities and generators, according to a report on the disruptive challenges facing utilities from the Edison Electric Institute, a trade group for investor-owned utilities.

As rates increase, energy efficiency and distributed generation become more attractive, which can in turn reduce sales. But lower sales could also lead credit rating agencies to downgrade debt issued by utilities, which would increase their cost of capital. This in turn could lead to higher rates, reinforcing the vicious cycle that some cheerfully call the utility death spiral. 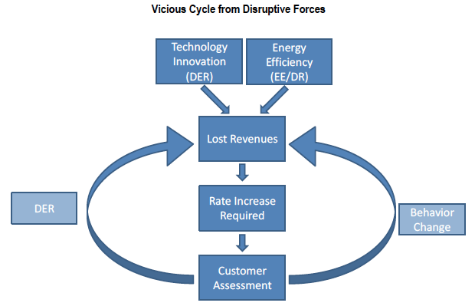 Many utilities have been tackling energy efficiency with gusto.

Utility spending has jumped from $1.6 billion in 2006 to about $5.9 billion last year, according to a November report from the American Council For an Energy Efficient Economy (ACEEE). 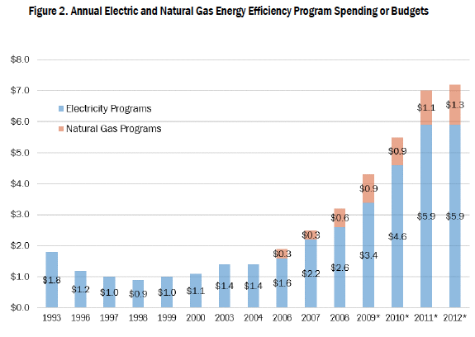 In 2011, savings from efficiency programs totaled about 22.9 million MWh, up 20% from the previous year, according to the ACEEE report. Nineteen states posted savings under 0.3%, indicating that there may be parts of the country were savings could be easily increased.

Utilities and others support energy efficiency programs because it is less expensive than building power plants and power lines. However, in traditionally regulated states, utility revenue is tied to sales volume.

Increasingly state regulators and utilities are supporting various forms of decoupling that allow utilities to recover their fixed costs regardless of how much electricity they sell.

Expect the debate over decoupling to continue in 2014.

Electric sales are taking a hit as more and more homeowners, businesses and other property owners put solar panels on their roofs. Distributed photovoltaic installations climbed from about 1,000 MW in 2008 to roughly 7,250 MW last year, according to a report from the Interstate Renewable Energy Council. 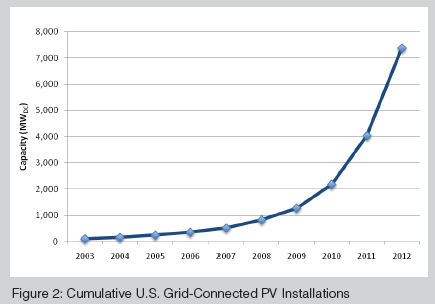 Arizona Public Service, which serves the Phoenix area, estimates that PV installations are reducing electric sales by about 0.5% a year, according to an October earnings conference call with analysts. With the cost of solar dropping and new financing methods becoming available, solar is expected to continue to grow.

In November, the Arizona Corporation Commission decided to charge solar customers a modest fee after a rather heated dispute between Arizona Public Service and rooftop solar proponents.

This debate will continue to play out across the U.S. in 2014.

Utilities and generators across the U.S. are taking a hard look at their power plant fleets.

A wave of new and pending federal environmental regulations is forcing power plant owners to make tough decisions about their coal-fired plants. Should they be retired, switched to natural gas or retrofitted with pollution control equipment?

In an October report, ICF International, a consulting firm, estimates that about 60,000 MW of coal-fired generation will be retired in the next four years. The retirements are expected to be concentrated in the Midwest and PJM areas.

The retirements may lead to higher power prices, which will affect utility and generator resource decisions.

For example, prices in the eastern PJM region could jump $3/MWh to $4/MWh for on-peak power and $1/MWh to $2/MWh for off-peak hours, according to a December report from the Brattle Group. Prices could climb to $11/MWh during on-peak hours and $6/MWh in off-peak hours because of increased gas use to replace the coal plants, the report said.

At the same time, state renewable mandates continue to ramp up, which is driving renewable development in many parts of the U.S. As renewable technologies mature, prices have been falling steadily, making renewables competitive with traditional power sources in parts of the country. 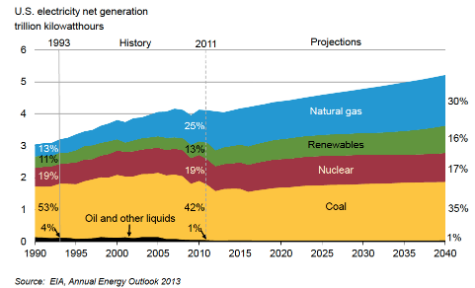 Next year, expect to see utilities and generators continue to announce plans to shut their older, least efficient coal-fired units.

But watch how they handle their new power supply: do they enter into power purchase agreements or do they build their own resources? A number of utilities like Portland General Electric have been opting to build their own power plants, which gives them a return on their investments. Utilities don't profit from PPAs.

Expect utilities to have their hands full in 2014 on these four major issues.