Why utilities are betting on wind

After a slow start to the year, the wind industry is set for a strong finish to 2013.

Utilities have signed power purchase agreements (PPA) totaling more than 5,670 MW and have received approval to build about 1,870 MW of utility-owned wind generation, according to an October report from the American Wind Energy Association.

Earlier this year, utilities around the U.S. issued requests for proposals for wind generation, hoping to take advantage of the extended federal production tax credit (PTC), which can be used for wind farms that are being built by the end of this month.

But rather than renewable mandates, the push for more wind is driven by low prices, often below the cost of fossil-fueled generation. Many utilities found the price for wind so attractive that they signed up for more wind generation than originally planned.

How low were the prices? PPA details are usually confidential, but we have a few clues about the prices wind developers are offering.

Southwestern Public Service, an Xcel Energy utility, will pay $22/MWh to $24/MWh for nearly 700 MW of wind generation under three 20-year PPAs the New Mexico Public Regulation Commission (PRC) approved in November. The PRC is one of the few state commissions that releases PPA details.

“These cost-competitive projects will save customers money by providing a valuable hedge to rising and volatile fuel prices well into the future," said Dave Sparby, NSP-M president and CEO.

And in Colorado, a third Xcel utility, Public Service Co. of Colorado, received permission to enter into two wind PPAs totaling 450 MW, which the utility says is less expensive than natural gas-fired generation.

In another signal that wind is a competitive resource, MidAmerican Energy, based in Des Moines, Iowa, plans to spend about $1.3 billion on 1,050 MW of wind by 2016. MidAmerican already owns 2,285 MW of wind, which makes up 30% of its power plant fleet. Iowa has a minimal renewable requirement, so MidAmerican is adding wind largely for economic reasons.

Other recent wind deals include:

Wind PPA prices have been falling in recent years, partly due to increased turbine efficiency, according to a report released in August by Lawrence Berkeley National Laboratory. Nationally, average wind PPA prices over the life of the contracts have dropped from $70/MWh in 2009 to around $40/MWh in 2012, the report said. And in a large section across the central U.S., prices averaged a little over $30/MWh in 2012. 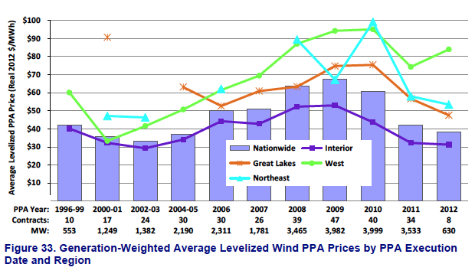 In 2009 and 2010, when natural gas prices plummeted, average wind PPAs were more expensive than the price of wholesale power. Since then, wind prices have dropped and “reconnected” with wholesale power prices, the report said. 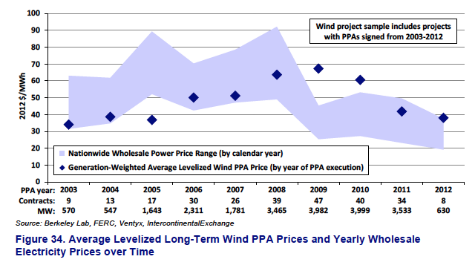 Wind PPA pricing is most competitive with wholesale power prices in the Interior region and least competitive in the West where contract prices ranged from about $50/MWh to more than $90/MWh in 2012, according to the report.

Outlook for 2014 and beyond

Despite competitive wind pricing, the outlook for wind development in the next few years is unclear.

Currently, the PTC shaves PPA prices by $23/MWh, but the credit expires at the end of this year. As usual, the wind industry and others are urging Congress to extend the tax credit, but so far it looks like the credit will end at least temporarily.

Even if the PTC is extended, many utilities are well ahead of meeting their renewable portfolio standard requirements. As demand growth remains sluggish in much of the U.S., renewable targets will not expand significantly.

Enjoyed what you read? You may also want to read Utility Dive's look at 8 disruptive companies that utilities should watch in 2014.

View all | Post a press release
Burns & McDonnell Promotes Justin Sherman to Lead Its San Diego Branch Office
From Burns & McDonnell
ESC Spectrum Expands Product and Service Offerings, Testing Capabilities, Regional Reach with …
From ESC Spectrum
AIQUEOUS hires new CTO to expand product suite
From AIQUEOUS
White Deer Invests in Fortress Power, a Battery Energy Storage Business
From White Deer
Editors' picks
Latest in Generation
© 2022 Industry Dive. All rights reserved. | View our other publications | Privacy policy | Terms of use | Take down policy.
We use cookies to optimize your experience on our website and for analytics and advertising purposes. By continuing to use our site, you agree to our cookie policy. Learn more
Accept