A task force decision by regulators could open the door to west coast development.

Now that offshore wind energy has taken a strong position in New England's future power planning, due in part to unexpectedly competitive prices, developers are looking toward new markets.

State mandates and contractual commitments promise to make offshore wind a key part of the East Coast power mix by the mid-2020s. But offshore wind is not limited to the east. A Sept. 17 meeting of a federal-state Energy Task Force could clear federal permitting obstacles, bring thousands of California coastal wind MWs into the market, and pioneer floating turbine technology.

Regulators are saying little ahead of the meeting but the Trump administration sees wind energy as "affordable and reliable," Department of Energy (DOE) Office of Energy Efficiency and Renewable Energy (EERE) Chief of Staff Alex Fitzsimmons told Utility Dive. And because of its high capacity factors, offshore wind "has the potential to contribute to reliability," he added. "It is a critical resource for the future."

First, however, developers will need the rights to build. That remains in doubt until at least Sept. 17. If they get those rights, a three-step plan may allow California to bring prices down enough to begin harvesting wind, just when it will be needed the most.

The September meeting has taken on greater significance since the Aug. 29 passage of California's Senate Bill 100, which targets 100% renewables for the state by 2045.

But California is only at 30% renewables now, despite being the national leader in utility-scale solar and distributed solar capacities and fourth in the nation in wind capacity. Offshore wind could be the needed boost.

California's highest peak summer load projection for 2018 was just under 52 GW, according to its grid operator. The state's gross offshore wind resource capacity is 1,698 GW, and six small areas outside existing "use exclusions" have a technical offshore wind resource capacity of 112 GW, according to a 2017 presentation to the Task Force by National Renewable Energy Laboratory (NREL) Research Scientist, Walt Musial.

Whatever portion of that potential policymakers and stakeholders agree can be harvested would certainly help the state reach its renewables target.

At the Task Force meeting, representatives of the Department of Interior, the Bureau of Ocean Energy Management (BOEM), the California Energy Commission (CEC) and industry and environmental stakeholders will confront the use exclusions.

Task Force meetings began in 2016 to identify areas in federal waters off California's coast that can be permitted for wind energy. At this one, BOEM looks forward to a "robust discussion" about "the next step of our offshore wind leasing process: issuance of a Call for Information and Nomination," spokesperson John Romero emailed Utility Dive.

The "Call" is the formal initiation of the process that would lead to development off the California coast. At the meeting, BOEM and the CEC will present "data and technical information" about the hypothetical timing and logistics of issuing a Call. Romero did not confirm the Call would be officially initiated, however.

Coastal traffic prevents development of major California load centers like San Francisco, Los Angeles and San Diego. Developers want leases for the central coast off San Luis Obispo County and for the northern coast off Humboldt County, where the wind resource is rich, and populations are relatively dispersed.

The big question is whether the U.S. Navy, the Task Force's dominant stakeholder, will allow development in those central coast areas where it oversees vital air, surface and submarine training operations.

The potential and the obstacle

Given capacity factors, the 112 GW technical potential could deliver 392 TWh of electricity per year to the grid operator, or about 1.5 times California's usage, Musial reported.

However, "potential is dependent on the level of policy support, technology attributes, the value of other market factors, and the prevailing electricity prices," Musial told the Task Force. Developers have plans to refine technologies and bring costs down to market-competitive levels, but they are waiting for policy support.

BOEM will make the final decision, but the most influential stakeholder is the Navy, Trident Winds CEO Alla Weinstein told Utility Dive. "But East Coast developers have shown we can find middle ground solutions to manage conflicts," she added.

The Navy's concerns "are legitimate," Magellan Wind CEO Jim Lanard said. Developers would need to commit to protecting critical Navy training and testing operations to get access to the "300 square miles [they] want within the Navy's 36,000 square mile footprint."

The value of the central coast's wind resource is increased by its extensive transmission infrastructure, Lanard said. "That transmission now serves natural gas and nuclear power plants scheduled to be shuttered over the next five years, just as the proposed (offshore wind) capacity begins coming online."

The northern California coast actually has stronger winds, Lanard said. But it lacks the transmission necessary to transfer generation from large projects to the state's load centers.

If the Navy signs off, an official process will begin that could deliver offshore wind-generated electricity to the California grid by the mid-2020s. Developers and policymakers are now working on technologies and approaches to make that happen. 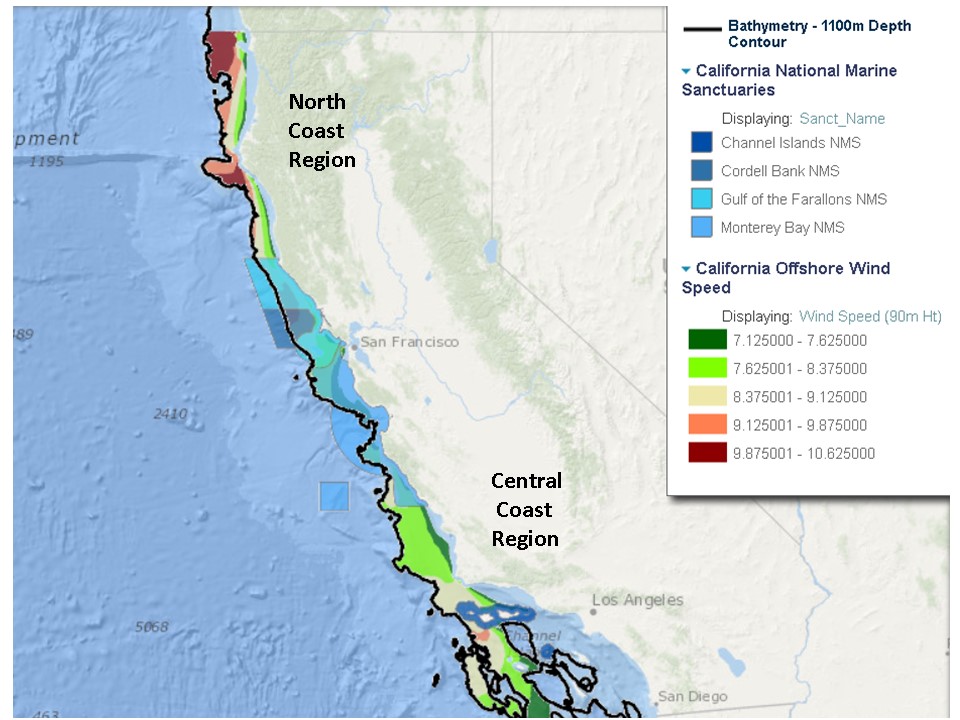 About 60% of the U.S. offshore resource is in waters deeper than 197 feet, but 96% of California's resource is in deep waters that make floating foundations, a technology in the prototype-pilot stages, the only option, according to Musial.

Statoil-Equinor's floating technology is being proven in the Hywind pilot off Scotland and Principle Power's technology is scheduled for a proof-of-concept pilot off Portugal next year, Trident's Weinstein said. "If we were selecting now, those two technologies are at the head of the pack."

Magellan Wind is readying a prototype of its TetraSpa floating platform, Lanard said, which could dramatically lower floating wind costs through the use of better quality but cheaper steel and by allowing the turbine to be mounted on the foundation's platform at dockside.

California can follow a three-step plan to fully access its offshore wind resource without interfering with the needs of the Navy or other stakeholders, Lanard said.

It would start with a small-scale project off the north coast, using a research lease. "Going through a state or federal agency would streamline the permitting process," Lanard said. "But the transmission capacity off the north coast is no more than a 140 MW."

That is enough for "one or two 50 MW projects, which would be the first U.S. floating wind installations," he said.

Redwood City Energy Authority, a Humboldt County customer choice energy provider, has moved in this direction. It signed a Memorandum of Understanding with Principle Power in October 2017 "to explore opportunities for offshore wind development." Jointly, they have begun development and await a north coast lease auction.

Step two would begin with three leases for each region, with no developer holding more than one lease in the region, Lanard said. "The Navy could allow 1 GW to 2 GW in the first central coast leases as first mover projects."

The third step could be driven by California's 100% renewables by 2045 and transportation electrification goals because demand for renewable energy would spike, Lanard said. "If we prove the technology off the central coast, the state might see a need to support a transmission solution to access the much greater north coast wind resource."

At that point, developers would be selling power into California markets. That means competing with low cost utility-scale solar generation but Weinstein and Lanard said they will be able to compete.

What will it cost?

But long-term contracts filed with Massachusetts regulators in April turned that goal on its head. The contract price for the 400 MW Vineyard Wind project was $65/MWh. It beat the long-term forecast in the University of Delaware 2016 Special Initiative on Offshore Wind study, which forecast a decade-long 2,000 MW build in Massachusetts would drive the price to $108/MWh by 2030.

Lanard, Weinstein, and Stephanie McClellan, director of the University of Delaware Special Initiative and lead author of the report, agreed the Vineyard Wind price's significance does not apply widely. It was an LCOE and included an investment tax credit unlikely to be available when California's projects commence construction, Weinstein said.

The mid-2020s California price could be at or below what McClellan's paper predicted for 2030. That research did not anticipate there would be the confidence in the market that has been created by the over 10 GW committed, contracted or in development in the New England region.

"Now we're in a moment that's just shocking, she said. "I don't think anybody would have expected we'd be able to get contract prices this low this quickly."

California regulators will recognize offshore wind's ability to provide power when the sun does not, and value that capacity at a price that will allow it help meet California renewable energy goals, Lanard said.