EIA: 700 MW of utility-scale battery capacity installed in US

Despite the excitement around energy these data, new data from the EIA illustrates just how small a resource they are compared to the entire United States. But batteries have a slate of use cases and multiple value propositions; with costs declining, analysts say there is much more capacity on the way.

Batteries can serve as both energy suppliers and consumers at different times, "creating an unusual combination of cost and revenue streams and making direct comparisons to other generation technologies challenging," EIA said. 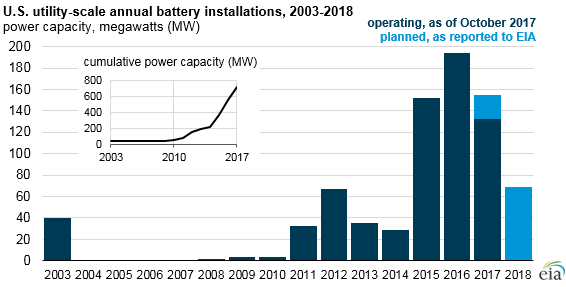 Lithium-ion is the storage technology often used today, and Lazard's estimates those batteries for peaker replacement currently run $282/MWh to $347/MWh, but are expected to decline in costs this year. Distribution use cases have similar costs and expectations, but in microgrids the costs are slightly higher, running from $363/MWh to $386/MWh.

Cost declines are being driven by a growing market for consumer electronics and demand for electric vehicles. Companies in Asia, Europe, and the United States are building large factories to scale up for expected demand for lithium-ion batteries.

A study from McKinsey & Co. last summer found the continued energy storage cost declines present a growing threat of disruption for utility business models. Recent bids for utility-scale solar-plus-storage projects may also give a glimpse where the industry is heading.

An Xcel Energy resource solicitation received more than 400 individual proposals last month, including what may be record-low prices for renewable energy paired with energy storage. The median price bid for wind-plus-storage projects in Xcel's all-source solicitation was $21/MWh, and the median bid for solar-plus-storage was $36/MWh. Previously, the lowest known bid for similar solar resources was $45/MWh in Arizona.