Report: More efficiency investment could save Dominion Virginia customers $1.7B

But officials at the utility say the state is already considering legislation to dramatically boost efficiency efforts.

Customer advocates in Virginia say the state's largest utility could save customers hundreds of millions — at a minimum — by investing more in energy efficiency, particularly when it comes to new home construction.

But according to Dominion Energy, the utility is already investing in efficiency through its all-of the-above strategy to meet customer demand. And legislation being considered in the state would be "transformative" for energy efficiency, leading to more than $1 billion in investment.

Efficiency is a "key component to sound energy policy and at the core of our strategy to provide our customers with clean, reliable and low-cost energy," Dominion spokesman Rayhan Daudani told Utility Dive via email.

Despite that, new research from Applied Economics Clinic, commissioned by Consumers Union, concludes a greater investment in energy efficiency would reduce new household energy demand by nearly 60%. Such a reduction would help significantly cut Dominion's need to build additional capacity, according to the research, and could save customers up to $1.7 billion over the next decade.

By investing in efficiency rather than new infrastructure, "Dominion could meet most of its future energy needs through smart energy efficiency projects ... Energy efficiency is a cost-effective tool that lowers energy demand, saves consumers money on bills and avoids costly new power generation,” Shannon Baker-Branstetter, senior policy counsel for Consumers Union, said in a statement.

If Dominion executes its current plans, Applied Economics Clinic estimates that in 2028 the utility's residential customers will pay $102 million more for electricity than they would with a "Low Efficiency" program, and $229 million more than with a "Medium Efficiency" approach.

The "Medium Efficiency" model ramps up Dominion's energy efficiency savings "to match the U.S. utilities with the highest savings targets, using Eversource in Massachusetts as an example," according to the report. Under this scenario, Dominion also reaches the savings goal by 2020, after which point annual additions to energy efficiency savings (new measures) continue to rise until they reach 3 percent of sales in 2023.

The report finds the cost-benefit balance in the low and medium scenarios is tipped in favor of increasing efficiency primarily through avoided capacity costs. However, "when combined with avoided transmission and distribution costs, the bill savings for residential customers outweigh the costs associated with energy efficiency programs." 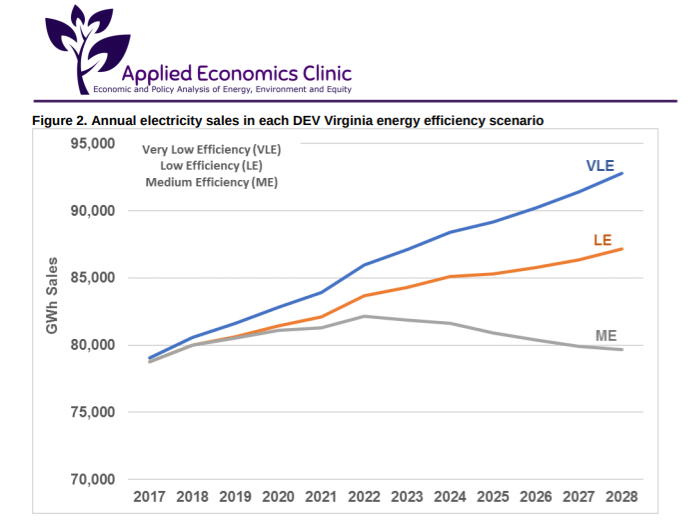 Consumers Union, the policy and mobilization division of Consumer Reports, is sounding the alarm in response to Dominion's most recent Integrated Resource Plan.

Released last year, the IRP recognizes rising demand and proposes a mix of renewables and natural gas, in addition to demand-side resources. Dominion's plan calls it a "balanced approach" that "will help the company meet growing demand while protecting customers from a variety of potential negative impacts and challenges."

The plan calls for adding almost 1 GW of solar capacity by 2022 that would be owned by third-party generators in northeastern North Carolina and Virginia under long-term contracts. Following that, at least 3.2 GW of new solar capacity would be added by 2032, and at least 5.2 GW by 2042.

The proposal also calls for adding 1,400 MW of new gas-fired capacity by 2032. Varying Dominion planning scenarios could include more gas-fired capacity. And Dominion may be in good shape when it comes to natural gas supply: The company is developing the Atlantic Coast Pipeline, which is expected to run roughly 600 miles. Approved by federal regulators last year, the pipeline would move gas supplies from West Virginia to North Carolina through a $5.1 billion system with a capacity of 1.5 million dekatherms/day.

Dominion is also looking to nuclear energy. The company announced in November that it intends to relicense two units at the North Anna Power Station in Louisa County, Va. for an additional two years. If approved, the units would be 80 years old when the licenses expire. And in 2015, Dominion announced it would apply in 2019 to renew licenses for its two Surry Power Station nuclear units in Surry, Va.

Dominion's IRP does call for demand side measures: The company will reach approximately 348 MW of savings through a mix of demand response and efficiency programs and tariffs by 2032 under approved programs. Another 78 MW of demand side resources have been proposed in the same timeframe. But Consumers Union says more can be done on this front — and the capacity and cost savings would be significant.

"Greater energy efficiency reduces future electricity demand and reduces the need for additional capacity," Applied Economics Clinic wrote in its analysis. "In the Medium Efficiency scenario, enough energy is saved to eliminate the need for 2.4 GW of new power plants," according to the report.

The report further states that "cumulatively, from 2018 through 2028, customer bill savings total $800 million to $1.7 billion," depending on the scenario. "It would benefit ratepayers, therefore, for [Dominion] to increase energy efficiency to greater levels," researchers concluded.

More efficiency on the way

But more efficiency investment is on the way, Dominion said. And according to Daudani, had the researchers taken into account proposed legislation in Virginia, "it would probably change a lot of the assumptions made in this report."

Virginia lawmakers are proposing a "transformative approach to energy policy, which would include $1 billion in energy efficiency programs in the Commonwealth," Daudani wrote.

The Grid Transformation and Security Act of 2018 would infuse $130 million over the next ten years into the utility's EnergyShare program, which has already offered $800 million in bill and energy efficiency assistance in the last three and a half decades.

Under the proposed legislation, the program would not only be extended, but funding would increase $13 million per year, according to Daudani. On top of that, the bill would require Dominion to file for $870 million in energy efficiency projects over the next ten years, "a substantial increase over current efforts," he said. "It also redefines what sorts of energy-efficiency programs would be deemed in the public interest in Virginia, which will streamline their approval process going forward."

The legislation is a part of the bipartisan effort in Virginia's legislature to undo a rate freeze, which was put in place in 2015 as a way to help avoid any rate shocks that might have come along with the Obama administration's Clean Power Plan.

While the details are still being decided, some kind of change is coming to Virginia's rates. Gov. Ralph Northam (D) has said he supports the efforts, which would give state regulators the authority to review rates.