The forgotten renewable: A user's guide to geothermal

In the world of renewable energy, geothermal is practically an afterthought. But geothermal offers something important that wind and solar don't: baseload capacity. Because geothermal operates around the clock, expect to see this resource, which taps underground heat sources, to keep growing, especially in the West where it is most abundant.

This recent chart from the Energy Information Agency shows why geothermal is so appealing compared with other renewable resources. 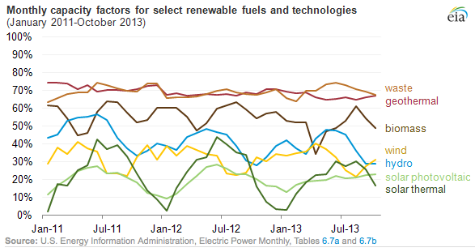 With a high capacity factor, a measure of how often a plant is operating, a modest-sized geothermal plant can produce as much electricity as a much larger wind farm or solar facility. Geothermal projects don't take up much space, especially when compared to large wind farms and utility-scale solar projects that can occupy thousands of acres.

How much do utilities pay for geothermal?

Ormat will sell the power from a just completed 16-MW geothermal plant in Nevada to the Southern California Public Power Authority for $99/MWh under a 10-year contract.

Cyrq Energy will sell the power from the recently finished 4-MW phase of the 10-MW Lightening Dock plant in New Mexico to PNM for $97.97/MWh under a 20-year contract that includes a 2.75% annual price increase.

Last summer, Riverside, California, added to its geothermal purchases from a TransAlta/MidAmerican Energy joint venture. The municipal utility signed a 24-year PPA that starts in 2016, according to a city memo. The city has a 46-MW PPA related with the joint venture. The pricing under the existing agreement was amended to $69.66/MWh, an increase of $7.57/MWh. Under another PPA, Riverside's purchases climb to 66 MW in 2016 at $72.85/MWh with a 1.5% annual price increase. The contract jumps to 86 MW in 2018.

Finally, U.S. Geothermal has a contract to sell NV Energy 19.9 MW from the San Emidio project in Washoe County, Nevada, for $89.75/MWh with a 1% yearly increase.

How quickly is geothermal growing?

Compared with wind and solar, geothermal is barely growing. The U.S. has 3,444 MW of installed geothermal capacity, up from 3,153 MW in late 2009, according to the Geothermal Energy Association (GEA). "Many of these projects are facing significant delays due to an uncertain policy environment and structural setbacks,” a recent report said.

Because it is highly dependent on a specific geology, the vast majority of geothermal capacity is in a single state. California has 2,732 MW of geothermal, according to an April report from GEA. Nevada has 518 MW and Utah ranks third with just 48 MW.

There are major companies involved in geothermal that can help drive the growth, including Calpine, Enel Green Power North America, MidAmerican Energy and Ormat. New technology like enhanced geothermal systems could also open up new areas to development.

Despite growing slowly in recent years, geothermal may be poised to take off. The Imperial Irrigation District in Southern California this month issued a draft report that found that the Salton Sea has about 2,000 MW of geothermal potential with an average energy cost ranging from $90/MWh to $120/MWh.

The effort to add geothermal resources in the Salton Sea faces challenges like building a 500-kV power line to deliver power from the region to the Los Angeles area.

The geothermal sector has the ambitious goal of providing 5% of the power in the U.S. Reaching the goal will take advances in technology and government support, according to GEA.

Geothermal will always remain a small part of the renewable energy sector, but its unique characteristics mean that it will continue a path of steady growth, especially if enhanced geothermal systems live up to their potential.