EIA: Gas to outpace renewables for 2018 US gen additions

As of February, renewable energy makes up 22% of total operating generating capacity, according to new data from the EIA. A part of that has been a robust streak of four years, when green energy projects made up more than half of the new capacity added. In 2016, renewables were 62% of new capacity — but this year EIA projects they will be roughly 36%.

Despite what appears to be a tide turning against gas-fired plants in states like California, the Northeast is about to add several units, with Pennsylvania expected to add more than 5 GW of capacity, while Maryland and Virginia are each expected to add nearly 2 GW.

"Most of the new capacity is being added on the eastern side of the PJM region along the Transcontinental, the Dominion Transmission, and the Texas Eastern Transmission pipelines," EIA said in a Monday note. 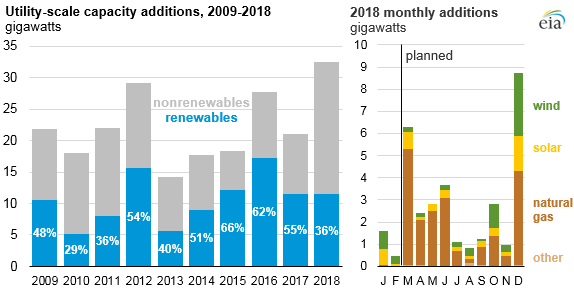 About 1.2 GW of new wind capacity came online in the first two months of 2018, mostly in states that are leading in wind generation, such as Texas, Oklahoma and Iowa. EIA also noted that in Texas, two utility-scale batteries totaling 20 MW were co-located at wind facilities.

EIA expects 5 GW of wind capacity to come online in 2018, outpacing solar's projected 4 GW of additions. Some 2 GW of new wind capacity will be located in Texas.

Gas-fired generation has gotten a significant boost in recent years from low natural gas prices, which are widely expected to remain low in the years ahead.

Earlier this year, EIA said it expects production of natural gas to increase through 2050 while production of crude oil and petroleum products begins to decline toward the end of that period. Furthermore, it projects that "trends in coal production in the United States could range from flat to continuing declines through 2040," depending on resources, technology and policy choices.