A cross-section of industries is supporting the shift: Uber announced future incentives for emissions-free drivers.

​Zero-emissions vehicles (ZEV) have gotten off to a slow start, but interest is growing as the technology becomes accepted, states support them for their environmental benefits and utilities embrace new load growth.

Private businesses are making the shift as well, evidenced by Uber's announcement this week that it will offer incentives for drivers with electric vehicles (EV).

As cumulative sales approach seven figures, a coalition of nine West Coast and Northeast states released a new plan to grow ZEV adoption over the next three years, with a focus on customer education and infrastructure development.

The Multi-State Zero Emission Vehicle Action Plan covers 2018 through 2021, to address a new phase of ZEV adoption. The plan was originally adopted in 2014, and cumulative vehicle sales in the U.S. have grown from 200,000 cars then to more than 750,000 today.

"The ZEV market is entering a new phase of development," the Northeast States for Coordinated Air Use Management (NSCAUM) said in a statement announcing the report. The group considers ZEV to include battery electric vehicles, fuel cell vehicles and plug-in hybrids. The transportation sector is now the largest single source of GHG emissions across the nation and light duty vehicles alone contribute almost 25% of total emissions. Environmental advocates say a deep carbon reduction will require advances in emissions-free transport.

California Democratic Gov. Jerry Brown noted in a statement that the coalition's nine states make up one-third of the nation's car market and "will bring millions of clean cars to America's roads and highways."

California leads in ZEV adoption in the United States and has the most ambitious goal of the coalition members, targeting 5 million vehicles by 2030. According to the updated plan, if the eight other states apply targets as proportionally ambitious as California's, it would result in the total sale of 12 million ZEVs, making up 35% of the market share. 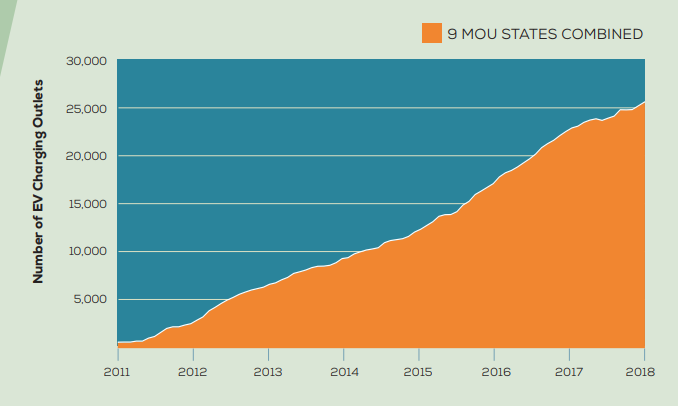 The action plan builds on the 2014-2017 effort and "represents a redoubling of state efforts" to accelerate electrification of the light-duty vehicle market, according to NSCAUM. The update recognizes "the important role that public-private partnerships involving the automakers, dealers, utilities and others play in the effort."

According to the report, five key areas will gain focus in the coming years:

The largest section of the action plan is focused on EV charging and hydrogen fueling infrastructure.

Among recommendations, states should open regulator proceedings with their respective public utilities commissions (PUCs) to consider utility deployment of charging infrastructure and rate design, and expand utility investment at multi-unit dwellings, workplaces and other "underserved" markets.

Consumer incentive recommendations include efforts to guarantee the federal income tax credit for ZEV purchases and leases will remain, along with new state incentive and outreach programs to improve access to incentives by low- and moderate-income consumers.

"We know that [the state] will benefit from active collaboration with other states that are committed to clean transportation as we focus on accelerating ZEV expansion in the state," New Jersey Democratic Gov. Phil Murphy said in a statement.

Separate from the nine-state action plan, a cross-sector group that includes automakers, utilities and consumer advocates has formally signed a Transportation Electrification Accord, which they say is a "roadmap to support a shared vision" for electrified transportation.

The cross-sector accord announced a soft launch in November and since then has added Exelon, American Electric Power and Southern Company to the roster.

General Motors is a party to the multi-sector accord, which Gross said "lays out the essential building blocks" for ZEV infrastructure. "Innovations in transportation electrification will benefit society as a whole – and cross-industry, multi-stakeholder cooperation is key."

"We see the writing on the wall," Adam Gromis, Uber's head of sustainability, told the Los Angeles Times.

Uber announced it would offer incentives for its drivers with electric vehicles, and it would launch a pilot in seven cities, with incentives tailored for each market. In some, that means education, while in others it can be a cash bonus for electric-powered trips.