Why mandates still matter in the age of cheap renewables

Wind and solar are now competitive with legacy power resources, but analysts expect state RPS laws will continue to drive growth for both renewable leaders and laggards.

In renewable energy, the biggest headlines these days often come from its increasing competitiveness.

Since 2009, solar PV has seen cost reductions of nearly 80% and wind has cut its installed price in half, according to the latest numbers from Lazard.

Those developments have private companies taking notice, purchasing more wind and solar energy voluntarily in 2017 than ever before, and forcing utilities to respond with new rate designs and renewable energy tariffs of their own.

But energy analysts say these growing voluntary purchases are only part of the story. In many states, an older, proven driver of renewable energy is still playing a vital role — the renewable portfolio standard (RPS)

RPS laws are used in D.C. and 29 states. They require a specific amount of renewable energy generation by a specific date, usually through utility electricity sales. Of the 120 GW of renewables capacity built since 2000, 56% was at least partially driven by RPS policies.

Renewables are now cost-competitive with other resources in voluntary markets, but markets do not offer the certainty of mandates, said Malcom Woolf, vice president of policy and government affairs for Advanced Energy Economy (AEE).

"It is a state-by-state story," Woolf said. Where resources are abundant, and markets are open, renewables can compete without mandates. But in vertically-integrated states, where investor-owned utilities dominate energy portfolio decisions, "RPS’s remain important.”

In those states, Woolf said, “the trend is increasing [RPS targets] to keep up with renewables’ improving economics." Though each state situation differs, recent analyses show that RPS standards are still delivering benefits for customers and the environment, and that the laws will continue to drive wind and solar deployment in many states. 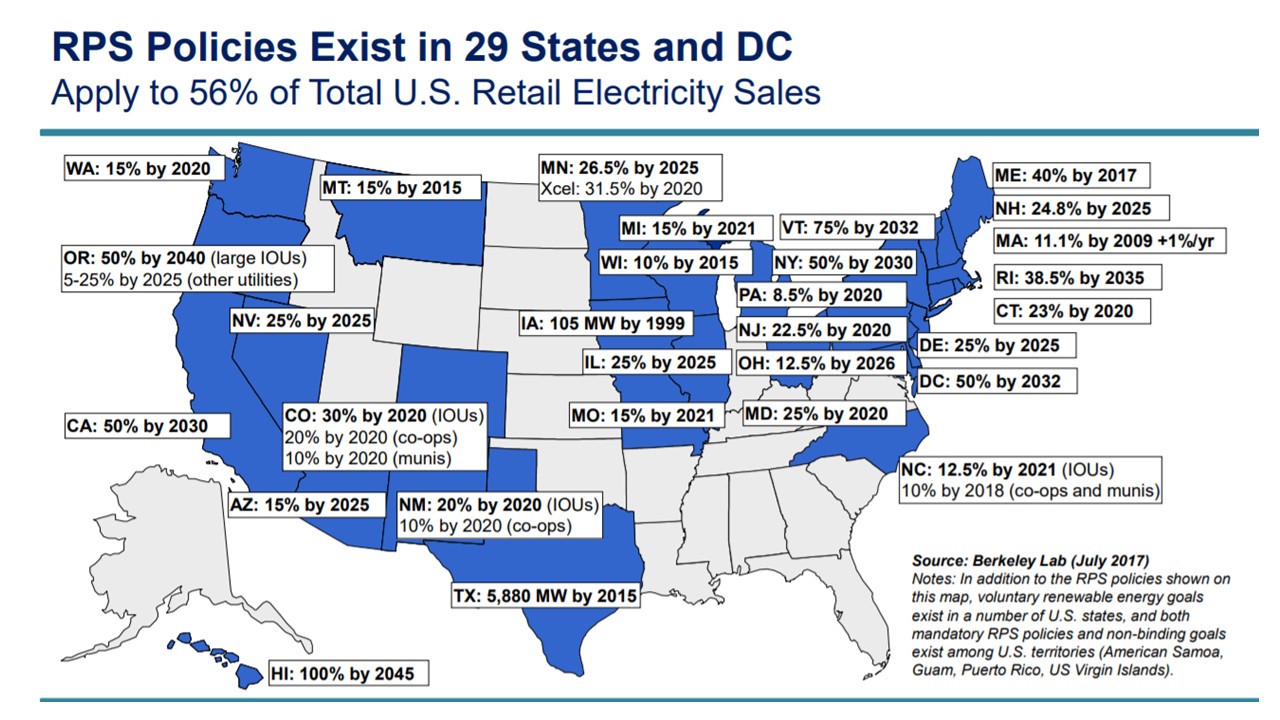 RPS laws by the numbers

Since Iowa introduced the nation’s first RPS in 1983, there have been approximately 95 revisions to renewables mandates, according to the 2017 RPS report from Lawrence Berkeley National Laboratory (LBNL).

In 2016 and 2017, there were 181 proposed changes to RPS laws. Only 13 were enacted — seven strengthening an RPS and six that were neutral adjustments. Only two of the many efforts to repeal, reduce, or freeze mandates succeeded, and one of those was reversed.

Early RPS laws called for 10% renewables or less, "but many states now have mandates for 15% or 20%,” Woolf said, “and leading states are adopting 50% RPS’s”

Most states have seen little difficulty meeting their requirements, ScottMadden Partner Chris Vlahoplus said in an email. Critical factors are the availability of renewable resources and the policy design.

The increasing competitiveness of renewable energy compared to other resources means more wind and solar deployment is coming outside of RPS mandates, Woolf said. But in states where regulated utilities are apprehensive or unwilling to buy renewables to replace existing assets, an RPS can be necessary "to get market access."

Recent data reflect Woolf’s point on voluntary purchases. In 2016, the portion of new renewables deployed due to an RPS standard fell to 44%, LBNL reported, down from an average of above 60% between 2008 and 2014.

The Energy Information Administration expects RPS laws to push renewable energy from 10% of the nation’s retail electricity sales to 13% by 2030. But it expects overall renewables to reach 18% by that time, with voluntary purchases and other drivers adding the balance.

Much of the competitiveness of renewable energy today is built on market experience spurred by RPS laws.

From 2000 to 2016, the U.S. increased renewable energy generation by 283 TWh. Of that, RPS standards required 146 TWh of the increase. In the last 10 years, an annual average of 6 GW of new renewables capacity was added to meet RPS laws.

More significantly, overall benefits are expected to be greater than costs.

The average estimated benefits to the system in reduced SO2, NOx, particulate matter, greenhouse gas emissions (GHGs), and water use were $258 billion. LBNL also found an estimated $78 billion saved through reduced natural gas use.

Who leads, who lags

Most RPS states are either working on "an aggressive path forward or maintaining the status quo," Vlahoplus said. The aggressive states are increasing their mandates, meaning RPS's "will remain a critical driver of renewable energy growth in these states."

The status quo states will meet existing mandates, but are only "tweaking" RPS policies, which could reduce their impact "as economic drivers become more important," he said.

But in some states,"it is irrelevant that wind and solar produce power cheaper than the regulated utility is producing it," AEE's Woolf said. "The utility can simply continue to rely on existing, if more expensive, resources."

NV Energy discovered the force of that leverage when it refused to work with Las Vegas's MGM Grand Hotel and Casino, he said. A statewide referendum this year could soon end the utility's monopoly on service and transform Nevada into a competitive market.

Nevada lawmakers also passed an increase of the state's 25% renewables by 2025 mandate to 40% earlier this year, Woolf added. Though vetoed by the governor, it was a further indicator of where renewables are going.

"Virginia doesn't have a mandatory RPS and lags far behind neighboring RPS states with comparable resources, like Maryland and North Carolina," he said. “Even Ohio, with only a 2.5% renewables penetration, is light-years ahead of Virginia.”

Dominion Virginia’s green tariff for large corporate buyers has driven renewables growth in the state, Tolbert said. “But that market is much smaller and much slower to develop.”

Another example is Florida, he added. Without an RPS, its regulated IOUs have allowed some of the nation’s best solar potential go underdeveloped.

“That points to another piece of this discussion,” Tolbert said. North Carolina, where the RPS has been weakened by revisions, and Georgia, which has no RPS, both have much more solar than Florida.

North Carolina continues to use the Public Utility Regulatory Policies Act (PURPA) and Georgia is growing solar with policies that support distributed generation like third-party ownership.

“The RPS has been the baseline policy because it provides market certainty and allows the fastest, smoothest, most continuous growth, but it's not the only policy,” Tolbert said.

With the federal tax credits being phased out, the RPS could become even more important, Woolf added.

“The tax credits lower the cost of obtaining RPS objectives,” he said. But, “a number of other policies that drive investment and open new channels to the market.”

Economics have long played a key role in states where resources are abundant, he said. “Iowa is at 36% wind now, and is on its way to much higher penetrations, but it long ago exceeded its mandate. Texas met its 2009 goal in 2005, but has now reached 13% renewables, and has the biggest installed wind capacity of any state.”

With renewables now becoming cost competitive, and even cost-advantaged, in more states, “you don't need mandates to drive growth in those markets,” Foley said.

Policymakers in other states, like New York and California, are still using RPS’s to “accelerate and drive the market,” he said. “They increased their RPS’s to 50% by 2030 because they want more renewables, possibly to get keep electricity rates down or to meet climate and pollution goals.”

The dominance of monopoly utilities in procurement has been complicated by third-party developers and private sector consumers, Foley said. Market dynamics are increasing choice and “we're still sorting out whether they complement each other or work against each other.”

Lessons from Kansas and Ohio

The legislature voted to terminate the mandate but recognized the value of wind to the state’s economy with “some favorable tax treatment as part of the termination,” Foley said.

Republican Gov. Sam Brownback “has identified renewables as one of the three or four strategic industry sectors for Kansas' economic development,” he added. Brownback also proposed a 50% by 2025 non-binding goal, “but wind is so cost-competitive there that utilities will probably achieve it anyway.”

Getting to 50% renewables would add an estimated 2,650 MW of wind capacity and 110 MW of new solar in the state, according to ACORE. Cumulatively, that would attract over $5.17 billion in investment and economic activity in Kansas.

Ohio tells a different story. Since 2008, when its Alternative Energy Portfolio Standard was put in place, Ohio has attracted more than $1.3 billion in asset finance, private equity, and venture capital for renewables, according to ACORE. The result was over 504 MW of installed wind capacity and 125 MW of installed solar capacity.

However, Foley said, there has been “very little investment or development or investment since 2014.”

Ohio’s Senate Bill 310 imposed a two-year freeze on growth in 2014. Other provisions limited the positive economic impacts of renewables. In 2016, House Bill 554 would have extended the freeze for an additional two more years, but it was vetoed by Gov. John Kasich (R), restoring the mandate at 12.5% renewables by 2026.

Restoration of the RPS in Ohio, along with other vital support policies, is expected to support over $15.5 billion in projected investment and economic activity in wind and solar, ACORE reported. The result will be over 3,000 MW of new wind capacity and almost 500 MW of new solar.

“Solar in the Southeast could be the next major non-RPS market,” he said. “There is currently 1.6 GW of solar capacity operating in Florida, Georgia, and Alabama and, more importantly, 1.8 GW of solar capacity under construction or in the early stages of development in those three states.”